the floral events in the canton of vaud

The canton of Vaud pays tribute to flowers. From the end of March to mid-May, Morges hosts the Tulip Festival with its 120,000 tulips. Magnolias and cherry trees bloom at the Arboretum of the Vallon de l’Aubonne from March to April. The Château de Vullierens’ Gardens present a fabulous collection of irises and daylilies from April to October. In May, the high pastures of the Montreux Riviera are covered with a white coat of daffodils, and, finally, the shores of lake Geneva in Morges host the Dahlia Festival from July to October.

the Arboretum of the Vallon de l’Aubonne

from mid-March to the end of April

The magnolias, one of the main attractions of the Arboretum of the Vallon de l’Aubonne, bloom from mid-March to the end of April or even into June for some species. Almost two hundred different varieties are on display in the park and enchant visitors with their delicious scent. Magnolias are trees or shrubs that come from warm temperate zones, but they have been able to make their home in our regions. 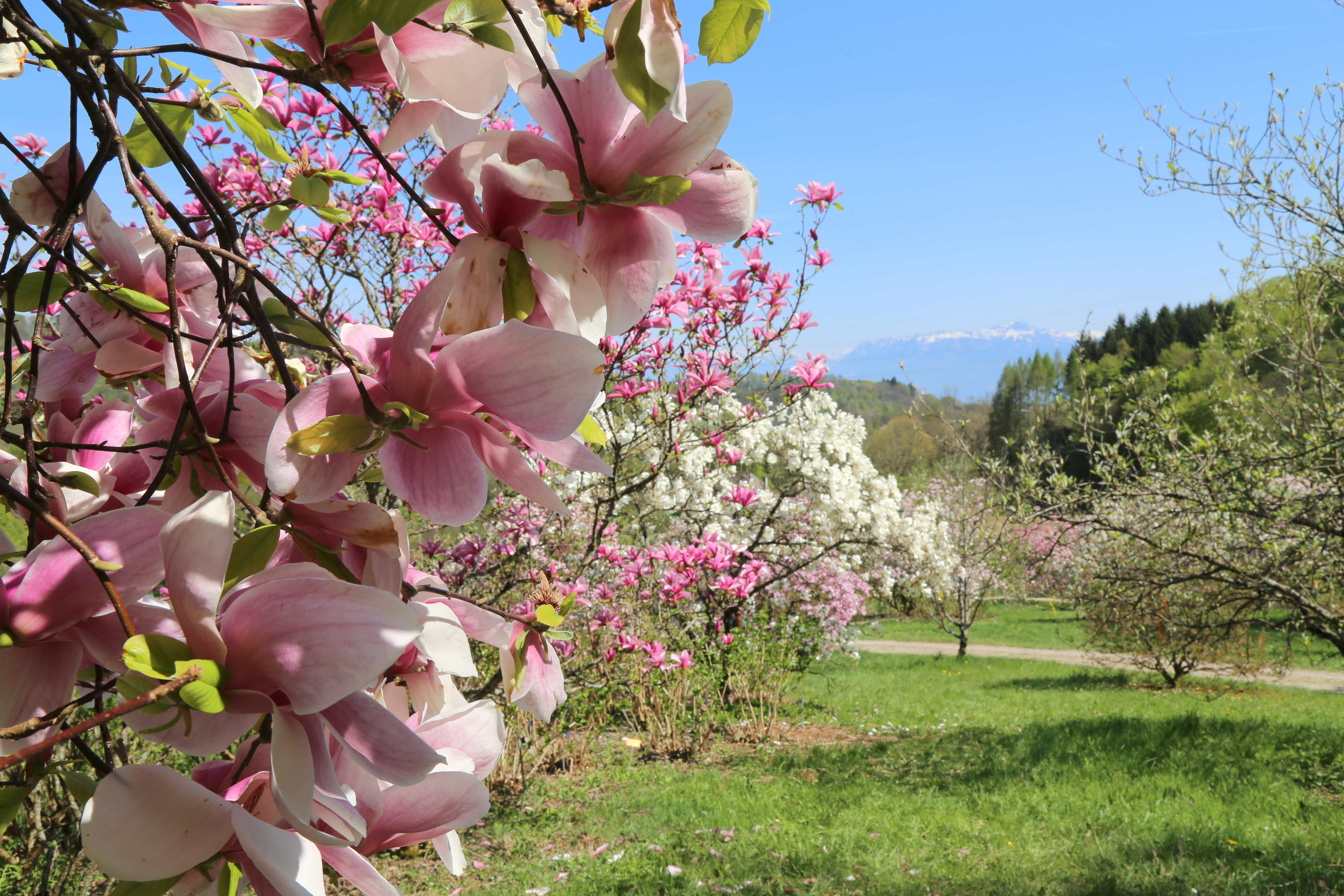 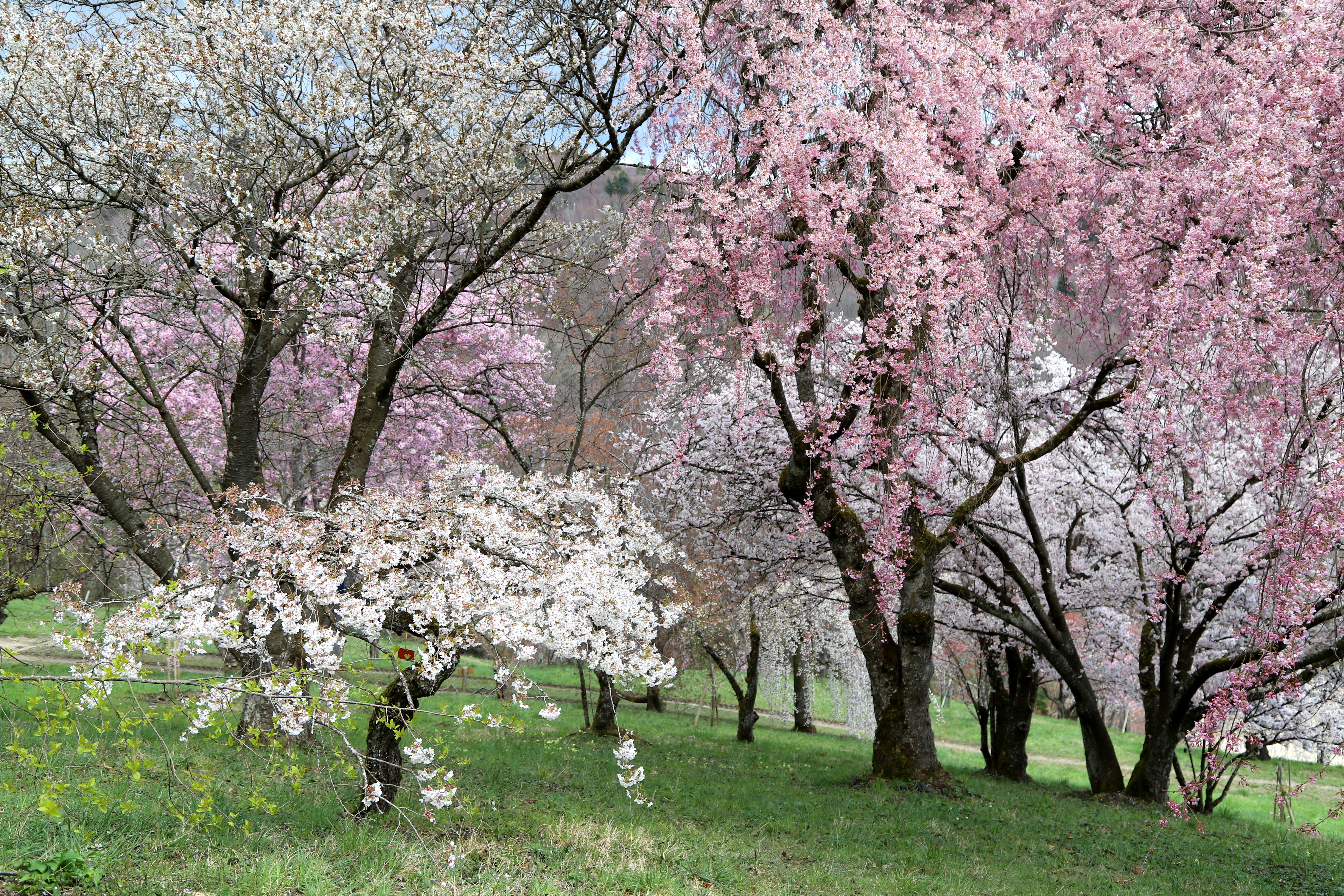 the Arboretum of the Vallon de l’Aubonne

from March to the end of April

The second major attraction of the Arboretum of the Vallon de l’Aubonne is the collection of flowering cherry and plum trees. More than one hundred different species and varieties blossom between the beginning of March and the end of April, delighting the many visitors with their beauty. Many of these trees are grown for their fruit or their ornamental value, like the famous cherry trees in Japan.

from the end of March to mid-May

Every year since 1971, Morges has greeted the return of the fine weather by celebrating the tulip. The 3 hectares of the “Parc de l’Indépendance” are the site of more than 120,000 tulips as well as daffodils, hyacinths and crocuses (early April). Various special
events are held between the end of March and early May on the occasion of this free floral show. 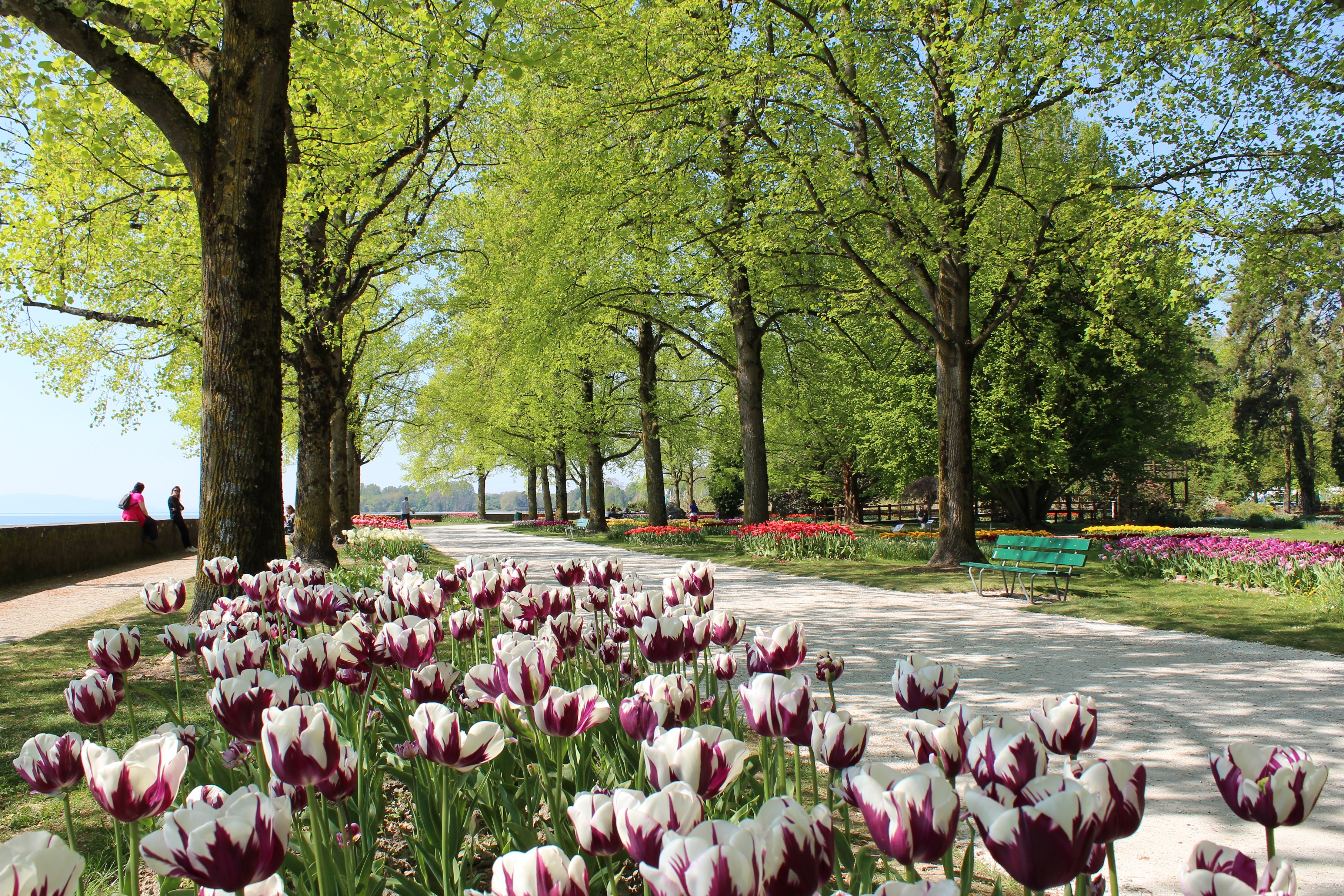 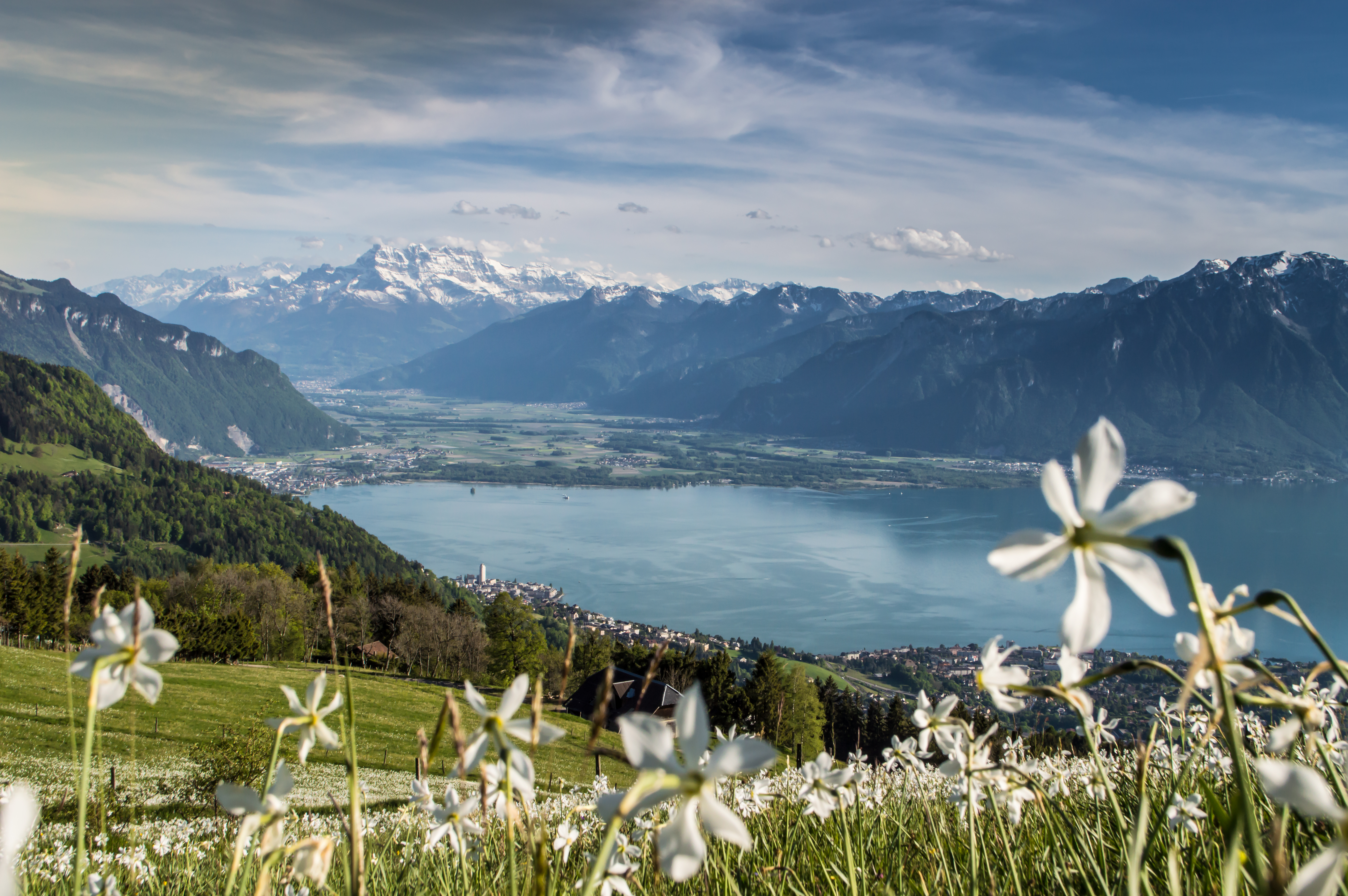 Throughout the month of May

Throughout the month of May – sometimes as early as the end of April and through until the start of June – the meadows of upper Montreux and Vevey are covered with a white coat. This elegant, delicate, fleeting cloak endows the Alpine foothills with its own distinctive charm for the space of a few days. Whether in Glion, Les Pléiades, Mont-Pèlerin, Caux or in Les Avants: discover the narcissi along the different trails with a beautiful view over the lake.

from April to October

The iris collection of the Château de Vullierens, created in 1955, is considered one of the most modern in Europe with more than 400 varieties, some reflowering in autumn. New varieties are introduced each year. During the peak of the blooming season, thousands of flowers form an incomparable mosaic covering 4 hectares. You can order rhizomes on site or via the online shop. 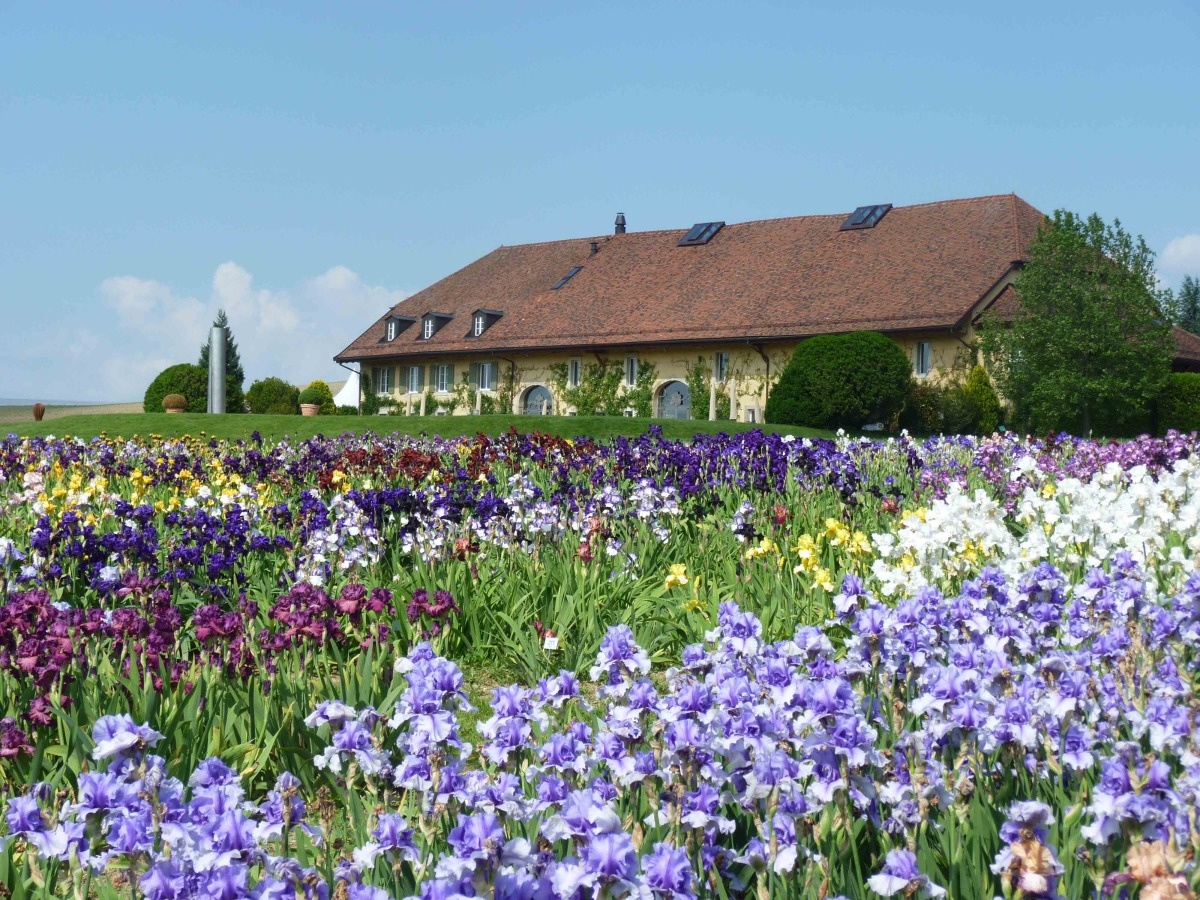 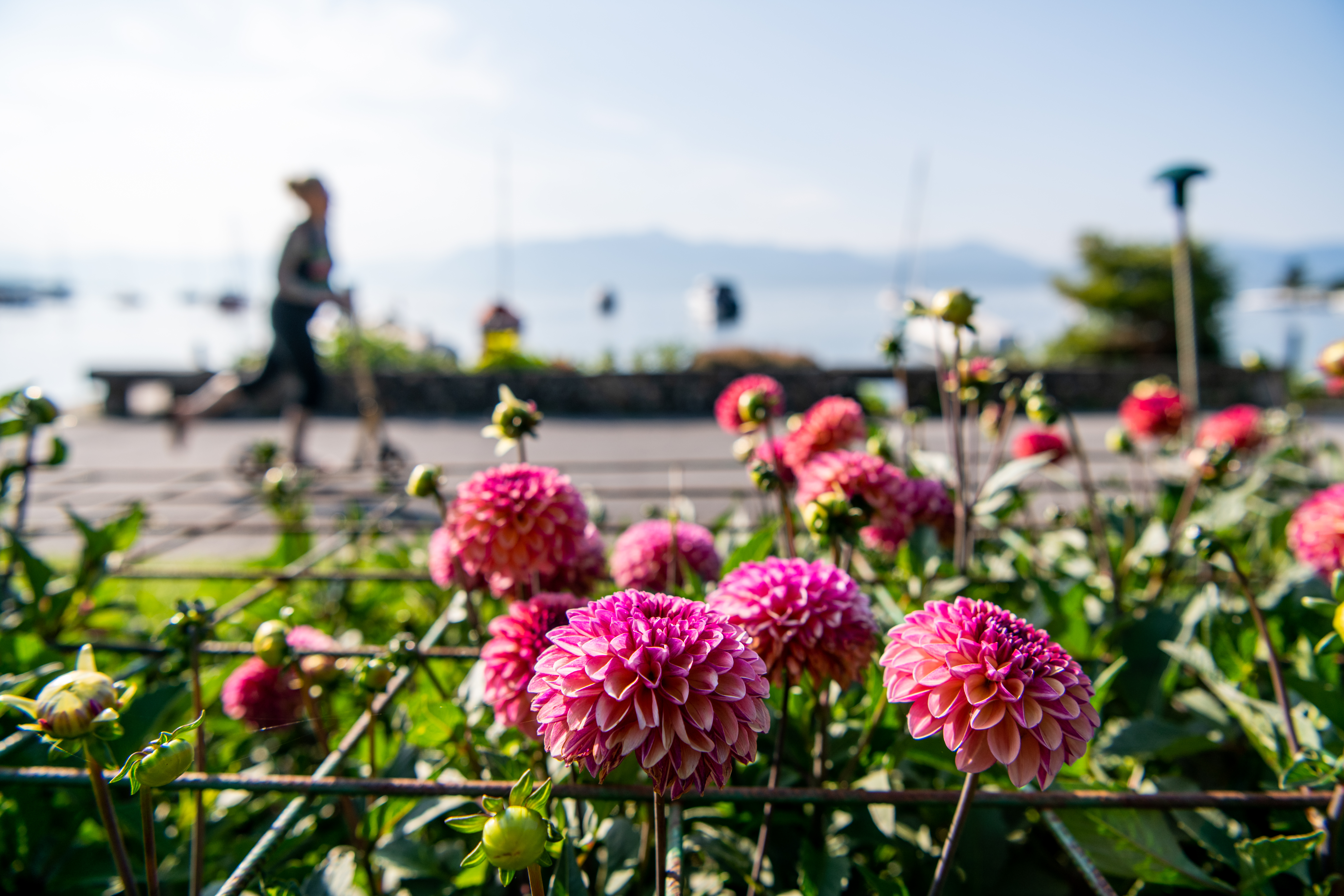 from July to October

Along the shores of Lake Geneva, the quays of Morges stretch over about a kilometre and a half from the Temple to the “Parc de Vertou”. This enchanting setting is enlivened by more than 1,800 dahlias during this exhibition-sale, unique in Switzerland, that runs from July to October. Every year, some 100 varieties, line an idyllic walking path to be discovered on foot or riding the Little Tourist Train. In November, the festival ends with a large sale of tubers of the dahlias on display. Free access.

from July to October

The estate’s second flower collection consists of nearly 200 varieties of daylilies, which can be admired in July and August. They flower abundantly and reflect the bright colours of summer. The botanical name means ‘Beauty for a Day’, but these flowers guarantee a colourful display for many weeks. An outstanding rose garden and many other flowers make for a wonderful summer excursion. Rhizomes can be ordered on site or online. 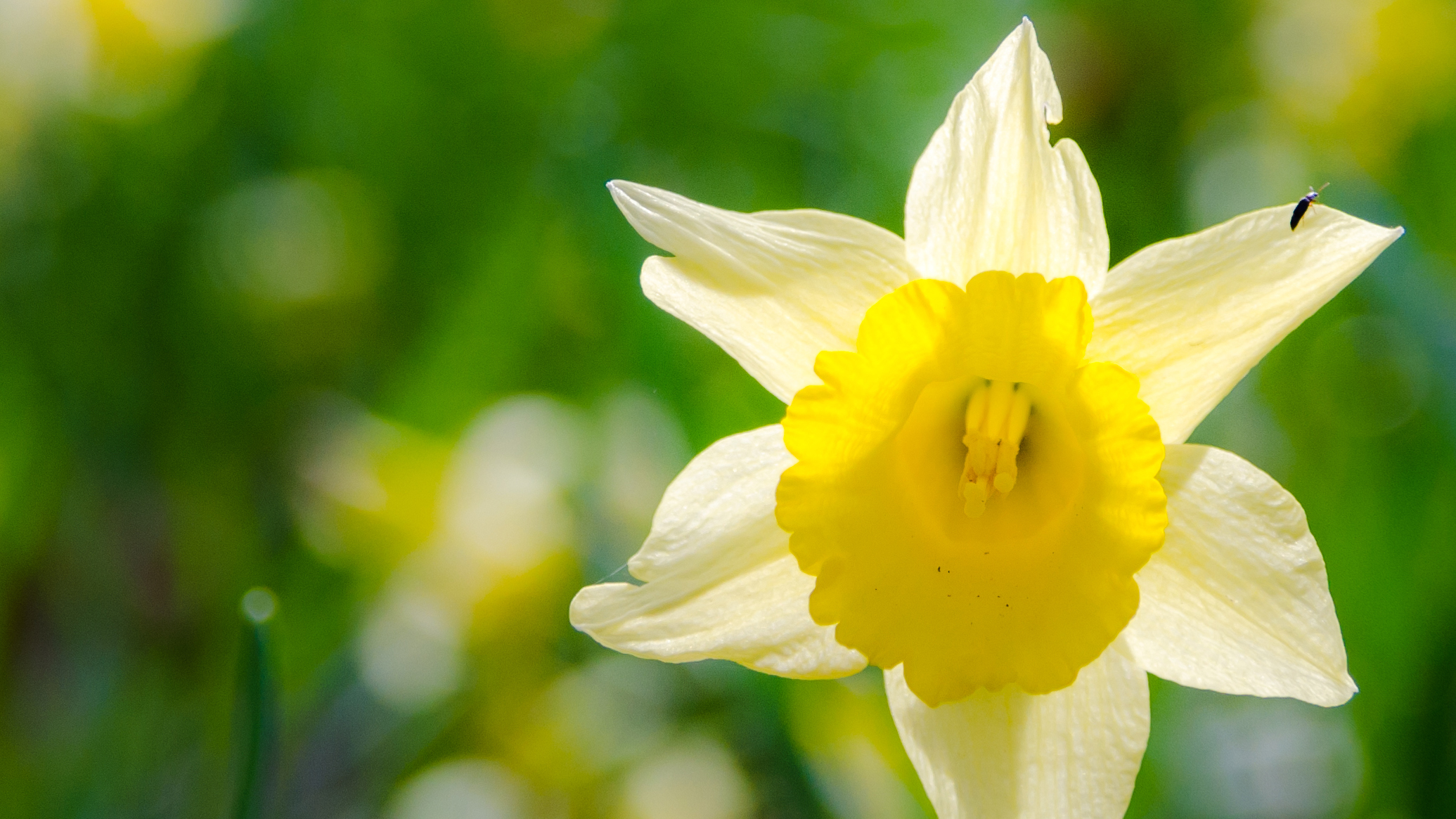 In the second half of March until April, Eclépens is the scene of a magnificent flowering with sunshine colours. This village at the foot of the Mormont hill is famous for its daffodil blooms. Walking along the Entreroches canal, you can admire the numerous yellow flowers in the shelter of a forest on various hiking trails.

free all year round

View of Lake Geneva, the Alps and Mont Blanc: an enchanting setting for one of the most famous parks in the Canton of Vaud. The Parc de l'Indépendance is an oasis in the centre of Morges, a natural area, ideal for family walks. More than 50 species of trees are maintained here, including chestnut trees planted in 1750. In the Spring, the park hosts the most famous flower show in the region: the Tulip Festival. More than a flower park, this place commemorates an important event in the history of Vaud. On 24 January 1898, the population celebrated 100 years of independence from the Bernese. On this occasion, the famous garden in Morges was named Parc de l'Indépendance. 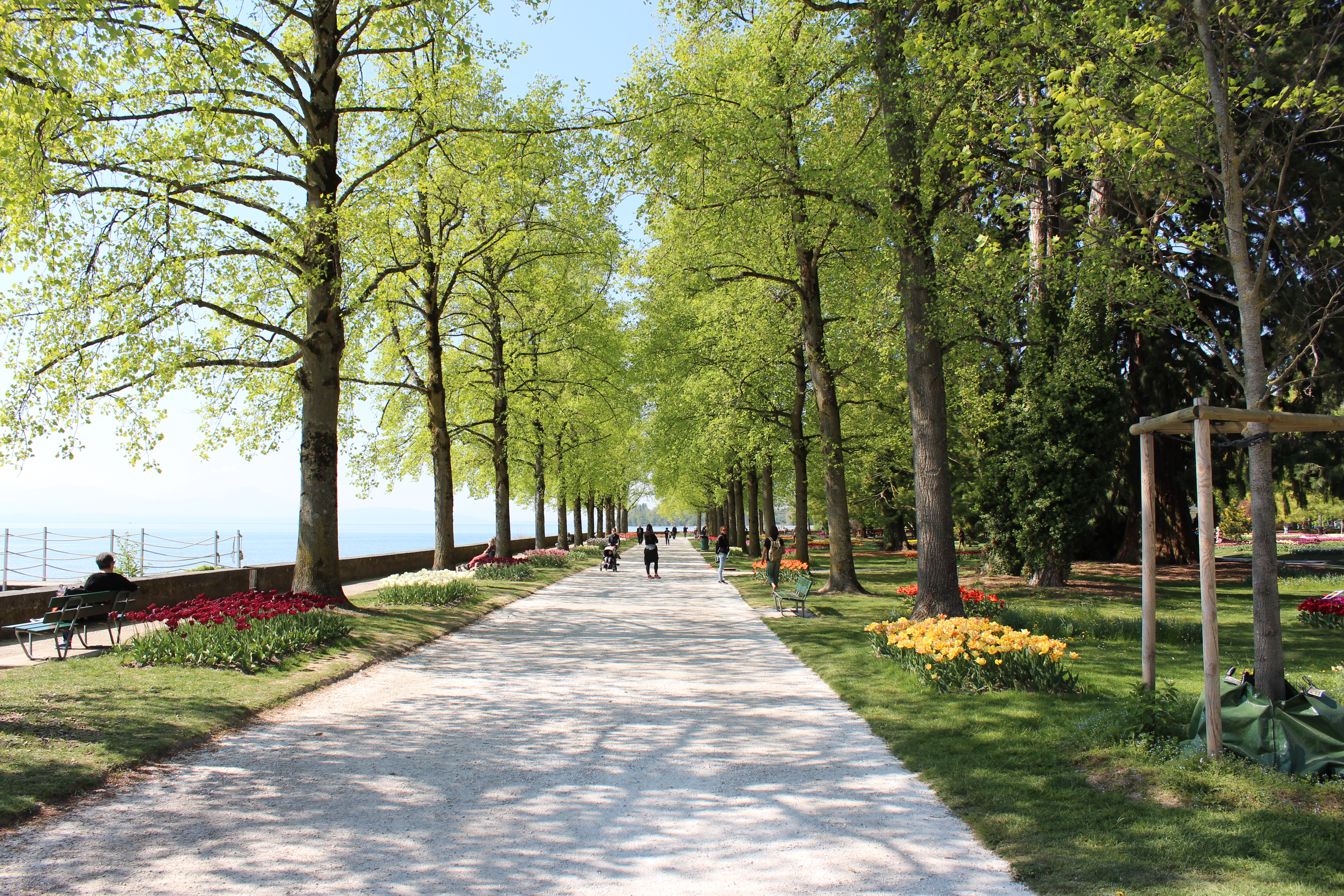